Welcome to the Vikingship Association! An excellent chance for anyone with a true Viking spirit to contribute & join us in building the first Viking Ship in the Faroe Islands since the time of our legendary ancestors.

Passionate volunteers from all across Europe will participate in this historical naval architectural remake. This great ship will be constructed employing similar tools and methods used in Scandinavia 1000 years ago. 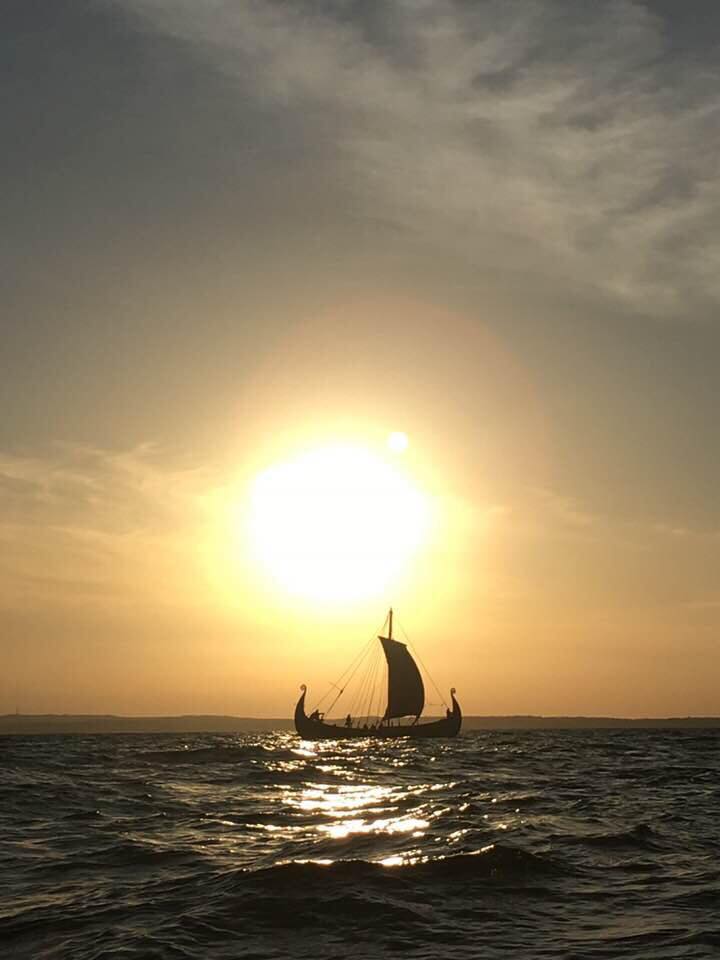 Our vision is to build an exact model of The Gokstad Ship, the largest Vikingship found.

We have partnered with two of the most reputable boat builders in the Danish Kingdom, Thomas Finderup and Guðmundur Sjúrðarson Norðbúð.

The Faroese clinker boat was placed on UNESCOS’s list of the intangible cultural heritages of mankind, in 2021. A boatbuilding technique that has been used across the Nordics for at least 2000 years.

The Faroese Viking ship will be a grand symbol in celebration of our Nordic Maritime and Navigation legacy.

Our passionate Volunteers will help actualize this great Vikingship; the adventure comprises food, accommodation, and a truly unique cultural experience, in the remote islands.

We urge eager young volunteers from all Nordic countries to come participate in constructing this archetypal masterpiece.

In participation with Thomas Finderup and Guðmundur Sjúrðarson Norðbúð, we are building an exact replica of the Gokstad Ship in Hovi, Faroe Islands. 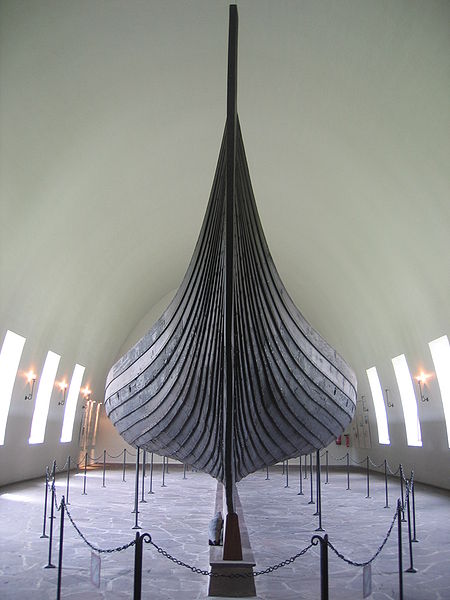 The Gokstad ship in Oslo

The Faroe Islands are a small archipelago of 18 islands, spread across in the North Atlantic between Iceland and Scotland. An autonomous nation, which is a part of the Danish Kingdom.

Colonized by Vikings 1200 years ago. The crossed the North Atlantic from Scandinavia in the might longboats. Fearless navigators, they managed to raid or colonize places all over Europe, even made it to Greenland and then North Amerika.

These ship where crucial for connection the Faroe Islands with mainland Scandinavia, and also for connecting the Faroese mainland.

The Vikings Longboat is a legendary superchip technologically far ahead of its time. It gave the mighty Norsemen as a great advantage in exploration, colonization and warfare.

The Faroe Islands is a genuine seafaring nation. The Ocean is in our blood. 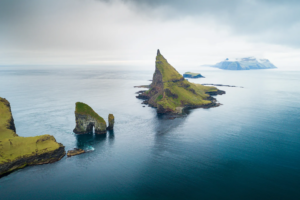 Since great Viking times, seafaring and reliable boats have played a crucial role in the survival of our nation. Over time the practice evolved into a unique boatbuilding tradition.

A fundamental component in Faroese Culture is rowing sport, where girls and boys compete as if their depended on Faroese festivals and on our national holiday the winners are named.

The Vikingship is necessary project in the name of preservation and revival of Viking heritage.

This has fueled our desire to build a real life Vikingship, which will become a symbol of our ancestral seafaring and boatbuilding heritage, a living symbol of ancient and modern craftsmanship, determination, and courage. A renewal Faroese Heritage and culture.

The Faroe Islands have many historical remnants from Viking times, the islands are dotted with names, ruins, legends and sagas. Hov is the epicenter of Viking heritage.

One of only two places mentioned in the story of Færeyja Saga, part of the Icelandic Sagas, in the Chronicles by Snorri Sturlason, from the 12th century, was the ancient Faroese village of Hov.

Hov (Hof) was the homestead of the Faroese Chieftain of the southern fiefdom of the Faroe Islands, Chief Havgrím.

Hov is the ideal and historically accurate place for the Vikingship.

The project will be managed by the Vikingship Association, which will build and mange the ship and boathouse. The inception to build the Vikingship begin with our founder, Finnbjørns realization that we neglected preserving our recent and ancient heritage, who in cooperation between public institutions and cultural associations in Suðuroy, started the project.

It the largest Vikingship ever found intact, and found in a mound as a burial ship, but was absolutely seaworthy before his death. It excels with a top speed of 12 knots, Clinker-build, 23.80 meters long and 5.10 meters broad. The boat was 32 oars, needing 64 rowers in all, with extra warriors eat could carry about 130 men in all.

Based on dendrochronological results, the wood for the ship hews in 890, built during the reign of Harald Fairhair. It had a 110 square meter sail, which could propel the ship up to 12 knots.

The Ship will be built from Danish Oak, and the association has agreements with Roskilde Viking Museum in this regard. The Sail will be made and woven from Faroese Wool, which is well suited for the purpose, as it’s the most robust wool in the world.

The Sail Itself will become an aspect of cultural preservation for Faroese Knitting Traditions. We will include associations across the country to participate in these unique tradition. 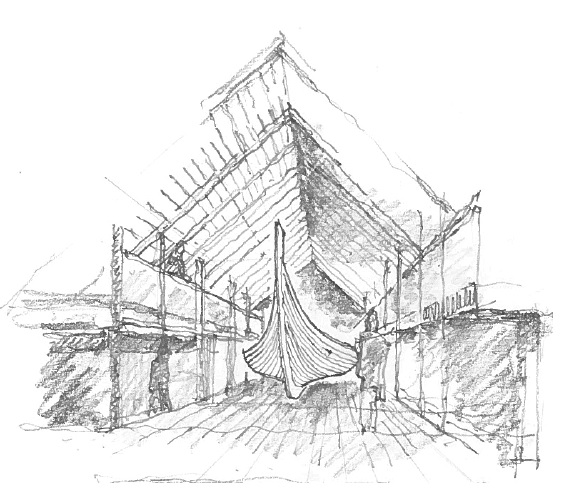 Interior perspective of the boat-house with the ship.

The boat-house construction is designed according to Old Norse architecture. We will be working in close cooperation with local archeologists and historians to ensure the design of the boathouse resembles that of buildings from the Viking age in Scandinavia.

As part of the design, the boathouse will combine boathouse and longhouse architecture, modeled after the Viking ring forts longhouses. Nonetheless, while maintaining Viking architecture, materials and facilities used in the shipbuilding will be of modern standards.

In addition to serving as a boathouse for the Viking ship, the boathouse constructed in the Gokstad replica ship will house the cultural center. Through the cultural center, visitors and patrons will be able to hold gatherings and host a variety of events during the spring and summer season, when the ship is away at sea.

Moreover, plans for the boathouse cultural center, include it serving as an official point for learning about boatbuilding and the history of Vikings in the Faroe Islands. Upon the official launch of the center, institutions and schools will be welcomed to use the facility for research.

But, most importantly, the Gokstad Viking ship and its cultural boathouse will serve as a popular tourist location on the island, helping to boost the economy of the rural Faroe Islands.

The smithy will be located on the south end of the boathouse, a true reflection of traditional Old Norse architecture. Upon completion of the project, the smithy will remain as part of the tourist attraction.

Visitors will be able to purchase nails as souvenirs, while more hands-on visitors and enthusiasts will be given a chance to forge their own nails, under the supervision of our in-house smiths. 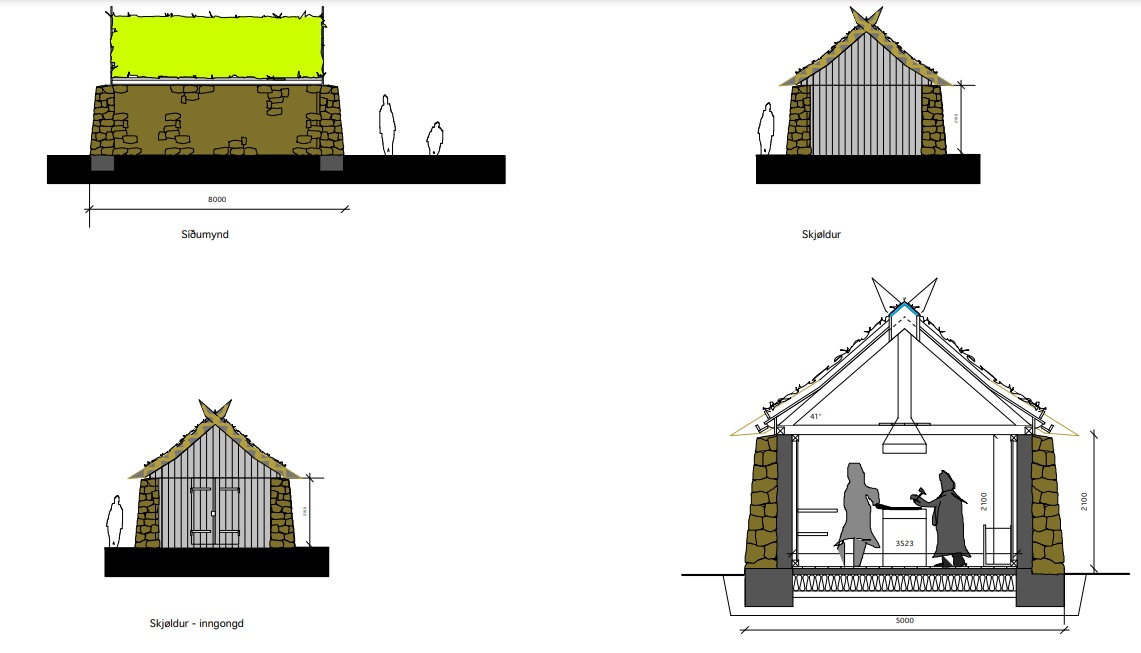 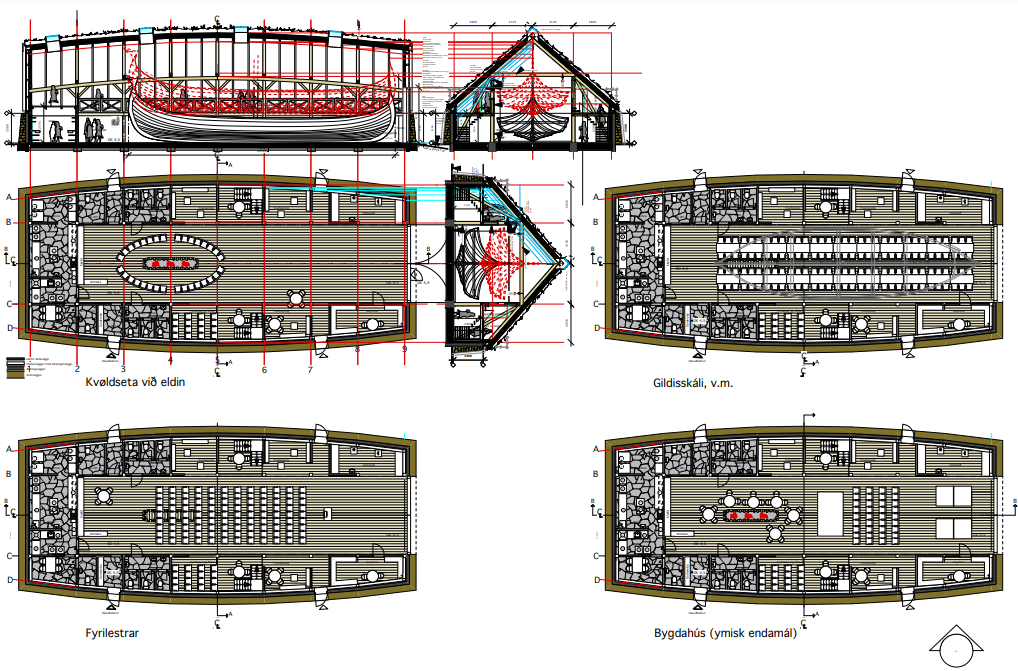 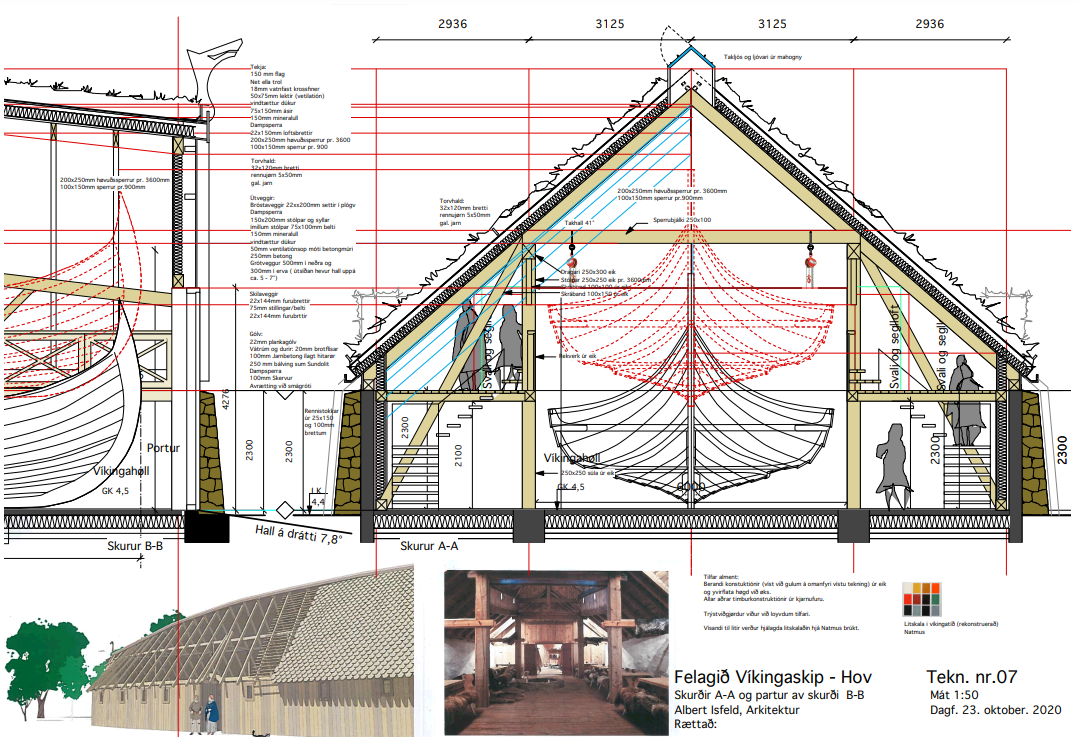 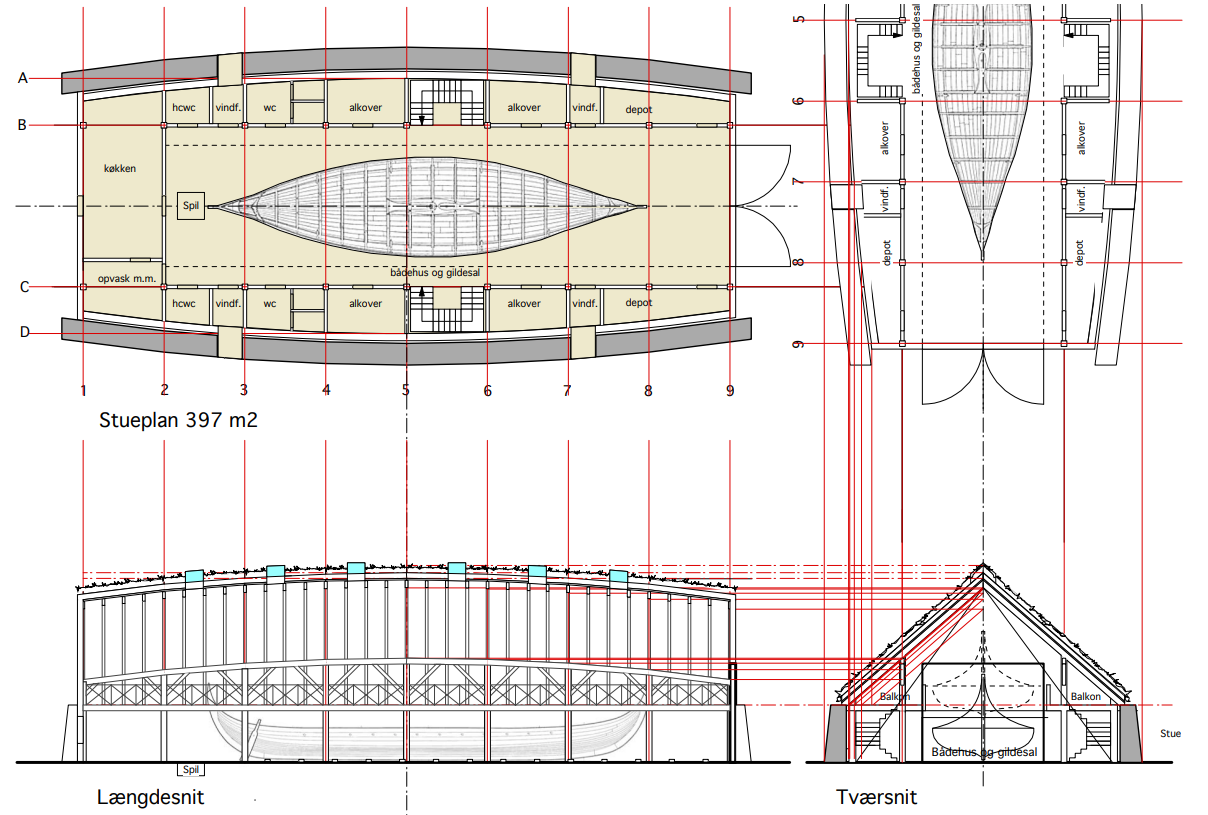 Drawings made by Albert Isfeld